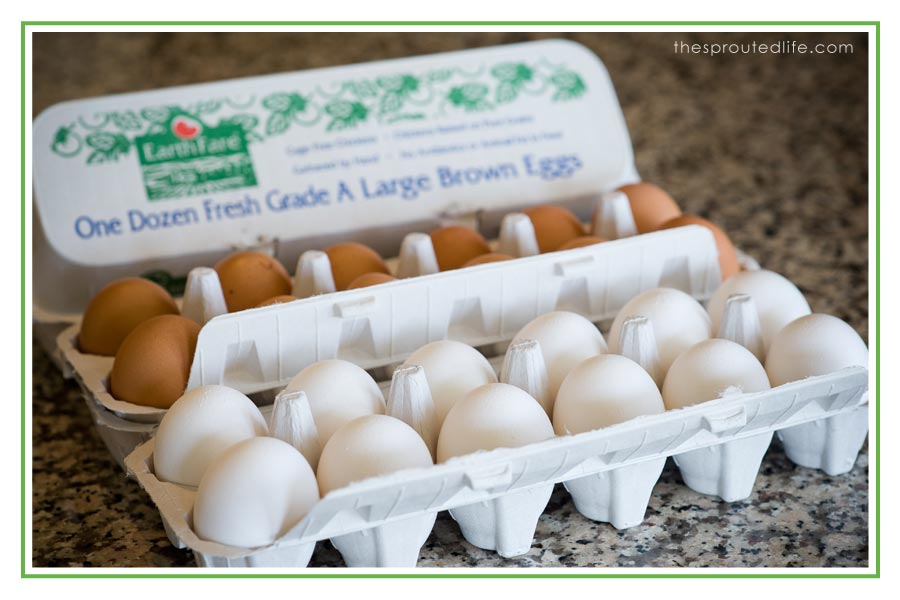 I picked my boys up from preschool yesterday and decided we needed a fun project for our afternoon, so we swung into EarthFare to grab some eggs, cabbage & onions.  (Really the trip was more pre-meditated than that because I had one of their $14 of $70 coupons and had no eggs, no orange juice, one apple, no bananas and I really wanted a flank steak for dinner).  Though to my little boys, the trip was all about getting supplies to color Easter eggs.  I have seen Pinterest posts and Facebook posts all over the place about naturally dying eggs, so I thought we would give it a try.  I bought, both brown and white eggs to experiment with, but by far the white turned out the best.

It was a super easy process.

First, I hardboiled all my eggs.  My favorite method for hard-boiling is to start with the eggs in cold water, bring to a rolling boil for one minute and then remove from heat, cover and let sit for 10 minutes.  Then I cool them off quickly in cold water.

I decided to try three different dye colors.  Honestly, it was a pretty cheap dye mixture, becuase you only use the onion skins and can keep the onion for cooking, I used half a head of cabbage and my turmeric was an old stale bottle jar that really needed replaced anyway. To prep I filled 3 pots with water and added my dye items. My ratio I worked with, was one cup of chopped onion skin/cabbage to one cup of water.  For the turmeric, I used 1 Tbps of spice to 1 cup of water. 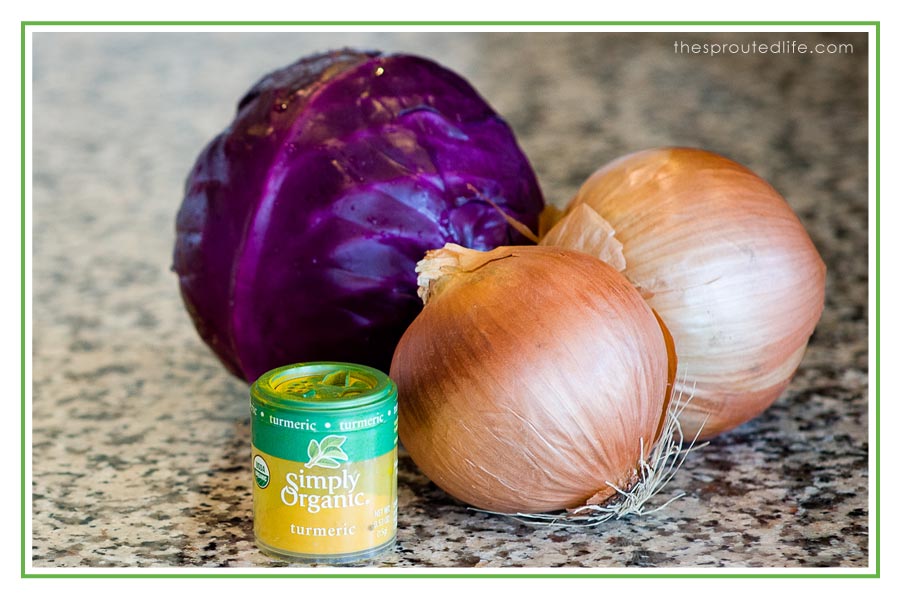 I then brought each pot of water/dye substance to a boil and then covered and reduced the heat and let it simmer for about a half hour.  After it cooled down a bit,  I strained the liquid into mason jars and added 1 Tbsp of white vinegar per cup of dye. 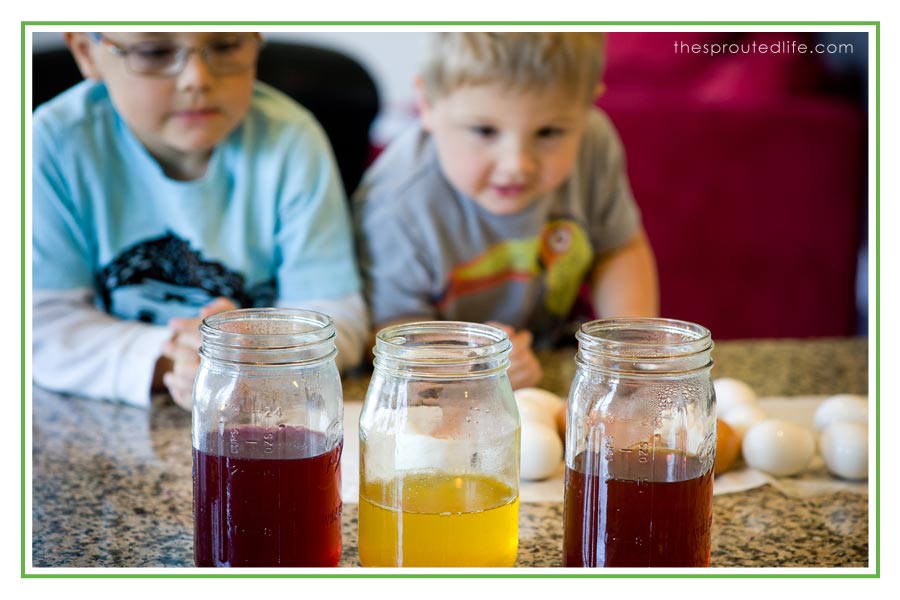 At this point my boys were so impatient for their eggs to turn colors.  This is definitely the step that was the hardest for them because it required waiting and the eggs aren’t just instantly colored.  We tried a mixture of both white and brown eggs in each jar.  After we filled the jars with eggs we put them in the fridge to sit.  We actually were so busy that night, that we didn’t check them until morning.  In the morning, we pulled them out and lightly dried them off with paper towels. 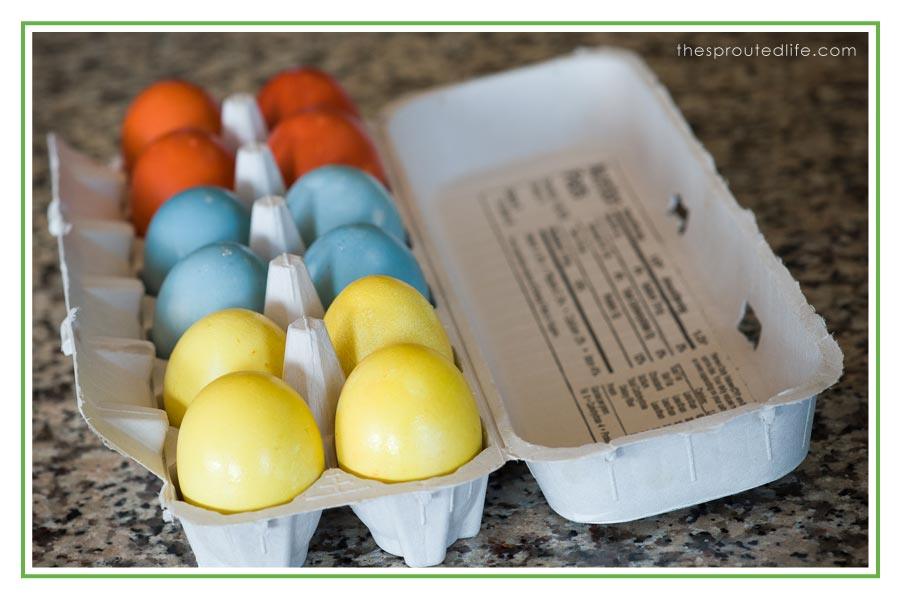 The front ones are the turmeric dyed eggs, then the red cabbage and finally the onion skins.  I think the onion was by far the strongest most concentrated dye and it turned both the white eggs and brown eggs very similar in color.  Though, I do think the blue ones turned out to be a really pretty color also.

I also had one batch that flopped.  I had read somewhere that you definitely wanted to add brown eggs to the red cabbage dye and you will get green.  Now, I am a graphic designer, have taken color theory and that idea didn’t seem like it was going to work, so I tried it anyway because I was curious…Not only are they not green, but they are splotchy messes.  Next year, I will experiment with some green veggies and see what I can come up with. 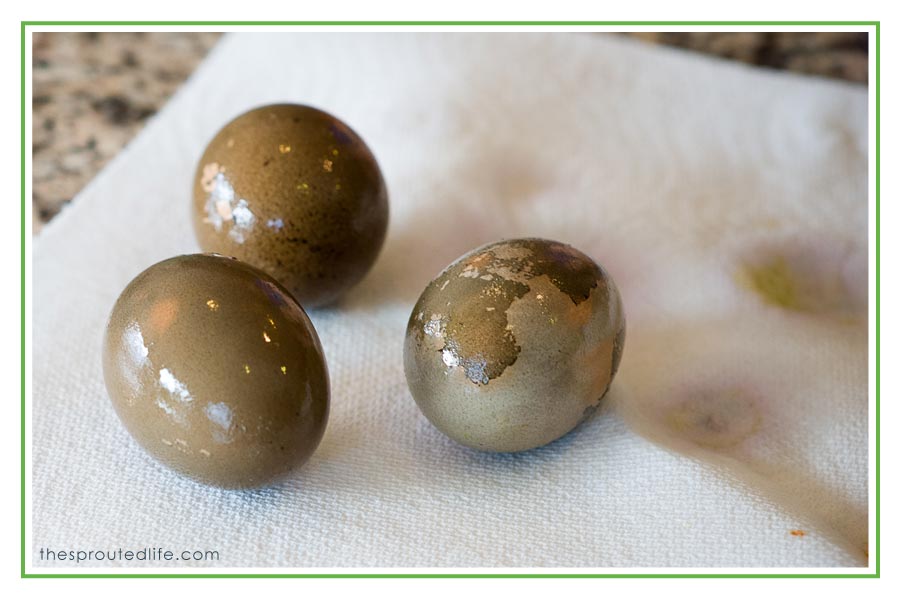 Look’s like we are going to be eating a bunch of cobb salads or egg salad this week, since I have a bunch of colorful hard boiled eggs in my fridge now! Happy Easter Weekend! 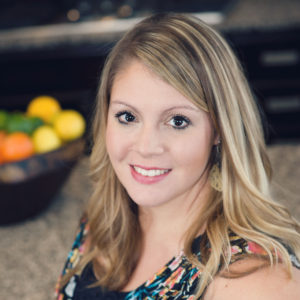